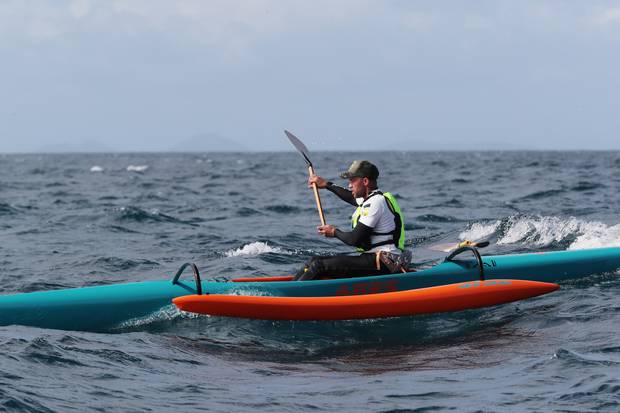 In steady 15 knot winds and boosted by following sea that started as a gentle assisting wind swell but finished in a confusing array of white capping waves, a collection of the best open ocean athletes in Australasia were in their element.

James Porter, an oceanski paddler based on the Sunshine Coast in Australia took line honours for the 28km course in 1h 38m 51s, just a whisker short of claiming the course record set five years ago.

But the most impressive performance of the day came from Pawarenga’s waka ama paddler Conan Herbert who won out in a three-way duel with his younger brothers Sean and Chase to set a new record of 1h 50m 56s.

The Herbert brothers were locked in a fascinating tussle from the halfway mark, where the conditions were prime for downwind paddling.  Conan managed to skip away with some impressive surfing skills, cruising up the field to finish in the top 20 overall.

Porter was virtually unchallenged at the front of the race though and displayed solid technique and fitness to power away from pre-race favourite, Andrew Mowlem who is New Zealand’s No.1 ranked oceanski athlete.

Porter put 600 metres on Mowlem in the final push to the finish line.

“That was the best downwind race conditions I have ever experienced.  I tried to pace myself at the start but the runners soon started jumping up and it was just great paddling from then on,” Porter said.

“I might have lost a little bit of time looking for the the right route in the last kilometre too, so maybe I could have pushed that race record,” he said.

Porter and Mowlem are sure to clash again at an event called The Doctor in Perth in November, a 27km race renowned for providing prime downwind conditions.

This year’s race, with a record field of 85 paddlers, started inside Tutukaka harbour and sent the competitors on a 28km journey out to a finish line on the eastern side of the Poor Knights Islands.

Race leaders were recorded doing speeds up to 28kph and averaging 15kph for the entire race.

The event was not without drama though with several paddlers extracted from the ocean by the safety fleet following the race and one disorientated paddler plucked from the ocean after losing his oceanski.

4,530 paddlers have looked at this page